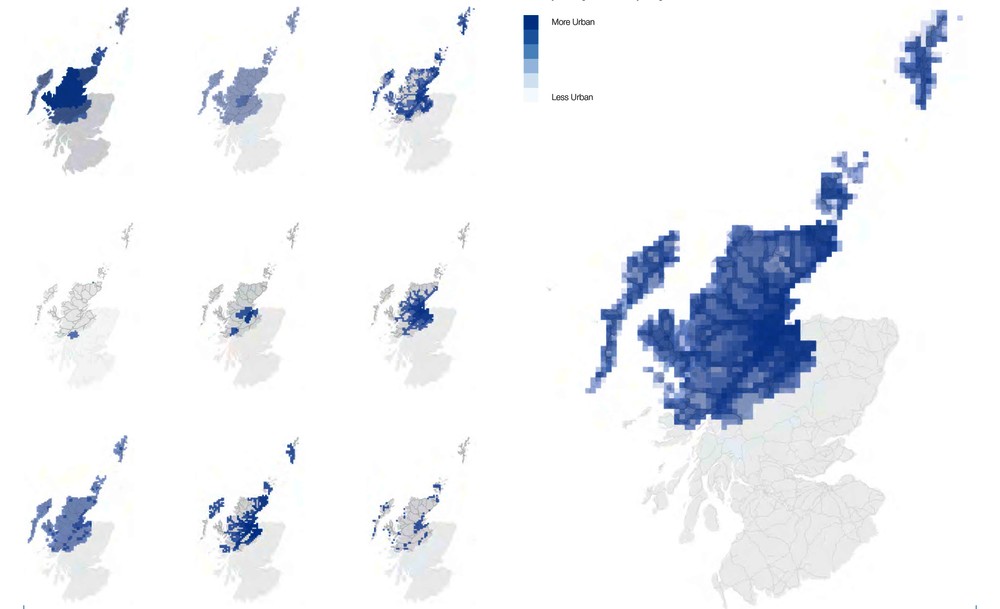 In 2016 the Infrastructure Space Atelier at MSA were commissioned by Satellite Applications Catapult, Highland and Island Enterprise and NHS Scotland to undertake spatial analysis of the Scottish Highland region. The purpose of the work was to develop a better understanding of the spatial condition and performance of the region, and explore the possibilities of digital connectivity for health services serving dispersed populations.
The project team was multi-disciplinary and the study adopted data visualisation techniques, focussing on analysing cross-thematic data to unpack insights into the lived experience of spatial conditions. Multi-scalar in approach, the study investigated physical and service infrastructural networks across the region, as well as place-specific evaluations. In this work, the combined effect of recognising buildings as components of an expanded network, and the speed, acceleration and intersection of digital and physical mobility, reframed the idea of a city. Coined, the Hyper-dispersed City, urban tendencies become apparent where urban operations adopt the appearance of rural space. Spatial analysis allowed conventional definitions of urban space, which assume high levels of density as a characteristic feature, to be challenged. The work recognised that conventional definitions ignored the behaviour of inhabitants within the identified region and exposed that it is possible for inhabitants of sparsely occupied space to behave in highly urban ways, that bear little traditional connection to the highly place specific forms of behaviour that would be implied by conventional readings of rural space.
The work is documented in four thematic atlases and a series of urban projects were presented to a field of SMEs in Inverness in October 2017 as part of a conference to disseminate the findings of the work. From this event, the analysis provided the foundation for pilot studies of remote healthcare delivery, focussing on the consultation and treatment of diabetes via satellite connection.