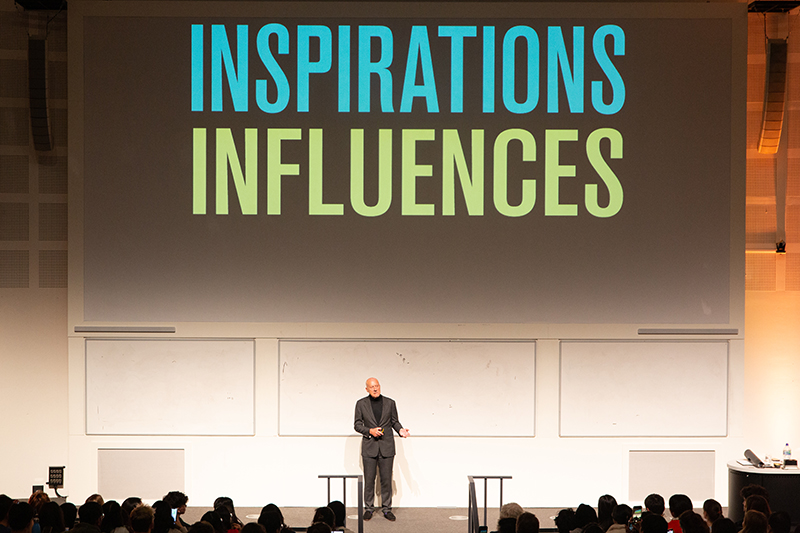 Renowned architect and designer Lord Norman Foster has returned to Manchester to deliver an inspirational guest lecture to architecture students.

Lord Foster, who graduated from the University of Manchester in architecture and city planning in 1961 before studying for a master’s degree at Yale School of Architecture, is the founder and executive chairman of Foster + Partners, a global studio for architecture, urbanism, and design, rooted in sustainability.

Lord Foster visited Manchester School of Architecture (MSA) earlier this week (November 8) to visit the School’s new teaching spaces at Manchester Technology Centre and to deliver a lecture at The University of Manchester to 500 architecture students as part of MSA’s ‘Inspirations’ lecture series.

MSA is an innovative collaboration between Manchester Metropolitan University and The University of Manchester, and is currently placed 7th in the world in the QS 2022 Architecture rankings.

During his expansive career, Lord Foster has designed some of the world’s most iconic buildings including the Millennium Bridge, 30 St Mary Axe also known as ‘the Gherkin’, the Great Court of the British Museum in London, the Reichstag in Berlin, the Museum of Fine Arts in Boston, airports in Hong Kong and Beijing and headquarters buildings for Hearst (New York), Apple (Cupertino), Bloomberg (London), Comcast (Philadelphia) and the Hong Kong and Shanghai Bank (Hong Kong).

During the lecture, Lord Foster spoke to students about his extensive career and his creations, starting with his first university projects right through to his most recent design for the Apple headquarters building.

Reflecting on his time in Manchester and how it helped to influence his career, Lord Foster said: “I remember always challenging the status quo and that being well received, so I do have good memories of Manchester and studying at the university.

“I think my time at university totally shaped, not just me, but anybody who has the privilege to go through a university course. And in a way, Manchester for me was very complimentary with studying at Yale, which followed afterwards. The combination of those two institutions with different backgrounds, I think I'm privileged to have studied at both.”

Professor Kevin Singh, Head of Manchester School of Architecture, said: “It’s an absolute honour for us to have Lord Foster visit in person and to deliver an evening lecture as part of our “Inspirations” series as his works and career have been an inspiration to architects far and wide.

“Speaking personally, it was his work, along with contemporaries such as Rogers and Grimshaw that was a huge inspiration to me as an architecture student at a time when contemporary design was not the mainstream. The 500 tickets available to students were snapped up in less than an hour which shows how excited our students are about hearing from one of the greatest architects in the world, with the added bonus that he studied here in Manchester in the 1950s.”

I remember always challenging the status quo and that being well received, so I do have good memories of Manchester and studying at the university.

Over the past five decades, Foster + Partners has pioneered a sustainable approach to architecture and urbanism through a wide range of work, from masterplans to offices, cultural buildings, airports and industrial design.

Lord Foster said: “Sustainability has been the lifeblood of practice for me from the 1960s. It's gained momentum, of course, since then, and it's very much in the public eye. Everybody's aware of the implications of global warming, carbon footprints and designing responsibly. But that's always, I think, been an ideal pursuit in terms of saving energy and pairing that to a better quality of life for everybody.”

Lord Foster has been awarded some of architecture’s highest accolades, including the Pritzker Architecture Prize, the Praemium Imperiale Award for Architecture in Japan, the RIBA Royal Gold medal and the AIA Gold medal. In 1999, he was honoured with a Life Peerage in the Queen’s Birthday Honours List.

He is president of the Norman Foster Foundation, based in Madrid, which promotes interdisciplinary thinking and research to help new generations of architects, designers and urbanists anticipate the future.

During his lecture, Lord Foster gave one piece of advice to the young architects: “I would give the advice that I’d have given myself, stay a student. And what do I mean by stay a student? I mean stay curious, question everything, challenge it, stay hungry for opportunity, but above all, be humble.”

POSTED ON 11 November 2022
Apply
Visit us
Follow us
We use cookies on this site to enhance your user experience. By clicking the Accept button, you agree to us doing so.
Accept