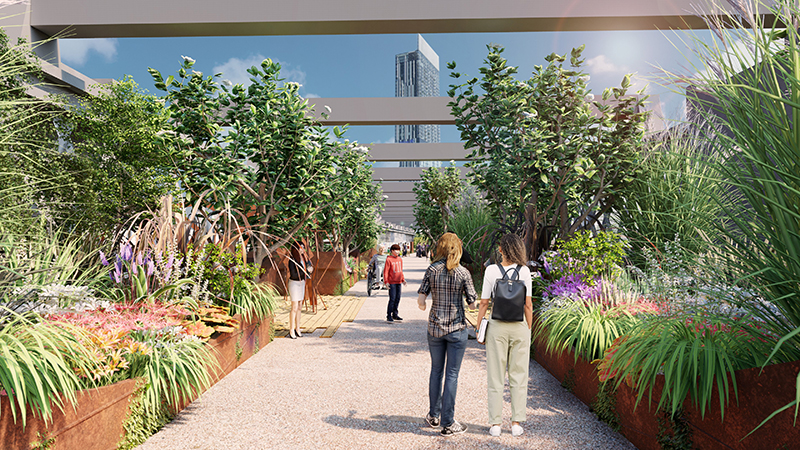 A team of Manchester School of Architecture alumni are working with the National Trust to transform Manchester’s disused Castlefield Viaduct into a green oasis.

A team from Twelve Architects, an international architectural practice, has developed a design concept to restore and reinvent the grade II-listed railway viaduct, which dates back to Victorian times, into a modern urban park as part of a pilot scheme led by the National Trust.

The design concept will see the cast iron and steel bridge, which was once used to transport coal in and out of the city, transformed into a beautiful and welcoming green space that will be accessible to all.

Matt Cartwright, Founding Director at Twelve Architects, said: “Manchester is an amazing city, as an alumnus of Manchester Metropolitan University it is amazing to have the opportunity to reimagine Castlefield Viaduct.”

During their time studying at MSA, the four alumni worked on projects focussed on the historical viaduct.

Cartwright said: “We have fond memories of our time at Manchester Metropolitan University and Manchester School of Architecture. It gave us a fantastic foundation in architecture and is a school that Twelve actively recruits from. As students we worked on projects around the viaduct and to now work with the National Trust, Manchester City Council and the local community to rethink the use of this iconic structure and to transform it into a green oasis is very special.”

Gandhi added: "As students we all designed our visions of futures on the historical viaduct, to be a part of the team realising one of those is an incredible experience. The viaduct’s history has remained hidden and inaccessible to the citizens of Manchester. The project will allow the public to finally experience what the mighty viaduct has to offer."

Supported by Manchester City Council, Greater Manchester Combined Authority and members of the local community, the National Trust will deliver the first phase of the project in summer 2022 in the form of a temporary park designed by the team at Twelve Architects.

Members of the public will have the opportunity to visit the park and share their feedback about the plans which will help shape the vision for the second phase of the project: the permanent regeneration of the viaduct.

Visitors will enter the viaduct through a welcome area containing a kiosk, a food truck and seating for those waiting to begin pre-booked tours.

Similar to curtains at a theatre, visitors will be presented with a green screen gate, a ‘living wall’, obstructing their view of the viaduct which will open to reveal the next striking stretch of the viaduct.

The second zone ‘The Viaduct as Existing’ features minimal architectural or landscaping intervention to focus on showcasing the existing structure.

In the final zone, visitors will be introduced to the viaduct that ‘could be’ featuring a lush garden oasis, filled with plants and shrubs contained within red steel planters linking to the viaduct’s industrial heritage.

Cartwright said: “Castlefield Viaduct is a much-loved and integral part of the city’s heritage. In the brief, we were tasked to create “moments of joy” and that is what we have sought to achieve with the preliminary design ideas. We want to encourage visitors to discover and enjoy what will be a distinctive green space. It should pay homage to the classic industrial structure which has shaped this area’s history while enhancing Manchester’s current and future vibrancy.”

The regenerated viaduct aims to bring people close to nature in the city, as well as acting as a stepping-stone to other green spaces and attractions in south Manchester.

More information about the project can be found on the National Trust website.

POSTED ON 3 August 2021
Apply
Visit us
Follow us
We use cookies on this site to enhance your user experience. By clicking the Accept button, you agree to us doing so.
Accept