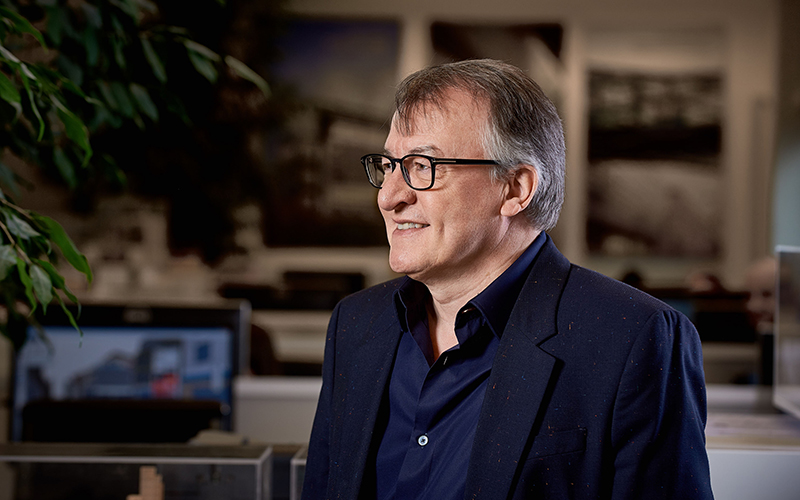 The Former RIBA President is a vastly experienced practitioner and educator

A vastly experienced practising architect based in the heart of Manchester, Hodder will take up his new role as Professor of Architecture in the School, while also continuing his leadership role in practice.

His practice Hodder+Partners won the inaugural RIBA Stirling Prize in 1996, British architecture’s most prestigious award, for the Centenary Building at the University of Salford. He served as RIBA President from 2013-2015, and he was awarded an MBE in 1998 for services to architecture.

Following the 1996 Manchester IRA bomb, Hodder+Partners designed the replacement Corporation Street footbridge in the city centre, and the practice continues to work closely with local authorities on significant building projects in the city and beyond.

A graduate of Manchester School of Architecture, Professor Hodder received an Honorary Doctorate in 2006 from Manchester Metropolitan University for his regional, national and international contribution to architecture. He was previously Visiting Professor at the University of Salford.

He said: “I am delighted to join Manchester School of Architecture, and contribute to Professor Kevin Singh’s vision and ambition for the School. It has a rich heritage in the city and it's always been very keen to engage in the debate about the city’s future growth and regeneration.

“There is huge regard in the profession for the School and its rankings speak for themselves. Manchester School of Architecture has long had a reputation for producing well-rounded architects that enter the profession with a broad knowledge, and who understand their responsibility socially, as well as the making of buildings.

“As a graduate, and having received an Honorary Doctorate from the University, I have always wanted to give something back and reinforce the imperative of the connection between practice and education, which I believe prevails in Manchester today.”

I am delighted to join Manchester School of Architecture, and contribute to Professor Kevin Singh’s vision and ambition for the School. It has a rich heritage in the city and it's always been very keen to engage in the debate about the city’s future growth and regeneration.

Professor Hodder is keen to be part of efforts to broaden accessibility within the architecture profession, as well as play a role in educating young architects on current important issues in the built environment, from retrofit and the future of buildings, to building safety and crucially, the impact of climate change.

“‘From the city, of the city, for the city, and beyond’ is our ethos and Stephen’s career and achievements certainly align with these aims. Stephen is passionate about teaching architecture and as such his focus will be working with our students on a day to day basis. I’m sure they will benefit from working with such a renowned and experienced practitioner who holds the highest design standards in practice and who understands the importance of academia to the profession.

“We are in the process of appointing a number of Visiting Professors and I look forward to them joining Stephen to boost our input from the highest levels of professional practice.”

As he is an alumnus of the School and an honorary graduate of the University, I’m delighted to welcome Professor Stephen Hodder back to the Manchester School of Architecture to contribute to the next chapter of our history.

Professor Hodder has been in practice since 1983. In 1992 he formed Hodder Associates which won the Royal Fine Art Commission/ Sunday Times Building of the Year Award for Colne Swimming Pool in Lancashire later that year. The Practice has now won over 40 major awards, and has delivered projects in Manchester, including 4 Piccadilly Place and apartment buildings on Cambridge Street and Water Street, as well as part of the ongoing RHS Garden Bridgewater. He has written and lectured widely, and has been a visiting examiner at a number of schools of architecture.

He is currently Chair of the Construction Industry Council, where he has accelerated plans to tackle climate change within the professions. Hodder+Partners was one of the early signatories to Architects Declare, a network of architectural practices committed to addressing the climate and biodiversity emergency , and with the Construction Industry Council has brought together 28 professional institutions to sign up to a common statement and action plan on climate change for professionals working in the built environment.

Professor Sharon Handley, Pro Vice-Chancellor for the Faculty of Arts and Humanities, said: “I am delighted to welcome Professor Hodder to the University as Professor of Architecture. His appointment reinforces the Manchester School of Architecture’s reputation for excellence in the city and beyond, and exemplifies the strong relationship between research, education and practice.